Since not everyone is keeping track of my Facebook updates (I know! What’s up with that?), I thought I should do the right thing, marketing-wise, and write up a post about the accolades that my firstborn has been racking up.  Leaving India has won four awards and was shortlisted for a fourth.

Want to make a first-time author happy? Give her awards! Yes!

The Workshop in New York has been a kind of literary home for me, so getting this award kind of feels like being a homecoming queen. (Except without the teen drama.) Some of my first published poems appeared in Workshop anthologies and in the Asian Pacific American Journal that this organization published in its early years. My very first book tour was with other Workshop writers back in the 1990s when several anthologies were published by the Workshop. And some of my dearest friends are people I met there at readings and at writing workshops. My lovely agent Anna Ghosh picked up the award for me in New York on November 7. To see the judges’ comments and the list of finalists, including Arundhati Roy (!) and Bonnie Tsui, please click here.

This is a regional award of the “west of the Mississippi” center affiliated with PEN, a large international writers organization. A few years ago PEN USA split the nonfiction award into ‘research’ and ‘creative’ to respond to the surge in memoirs and other non-research-based nonfiction works.  The ceremony was held in Beverly Hills in November, and my friend Cecilia Hae-Jin Lee accepted the award on my behalf; click here for her account of the gala event, which included Hugh Hefner and The Fonz. Here’s the full list of winners. 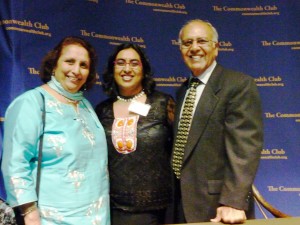 I was able to attend the lovely awards ceremony at the Commonwealth Club in San Francisco with my parents. We were told that this year’s nonfiction contenders were so strong that jurors decided to bestow an additional silver medal.  The gold went to Rebecca Solnit (A Paradise Built in Hell); the other silver went to William T. Vollman (Imperial). Also in the running were Dave Eggers (Zeitoun) and Ray Raphael (Founders).
Full list of winners: here.
Audio of the awards ceremony and short speeches by all the winners: here (scroll to last item; my bit starts around 43 minutes in). I talked about today’s anti-immigrant backlash and its historical roots.

This is a national award from the largest LGBT literary organization in the United States. I posted my acceptance speech about why LGBT folks should care about immigrant rights here,  and Lambda published a nice interview with me here. The full list of winners in all the various Lammy categories is here.

The William Saroyan International Prize for Writing, at Stanford University, named Leaving India to its shortlist of 15 contenders for best nonfiction book published in 2009. Ultimately the winning book was The King of Vodka by Linda Himelstein.

Thanks so much, everyone, for cheering for Leaving India as it makes its way into the hands of readers.