I was on a beach in Goa while my book received its fourth award — this one from Pen Center USA, a branch of the international writers’ organization, at the Beverly Hills Hotel last weekend. An L.A. blog covering the event mentioned me and Hugh Hefner in the same paragraph:

In Cecilia Hae-Jin Lee’s acceptance of the Research Nonfiction award on behalf of Minal Hajratwala, she reminded the audience that as we enjoyed our delectable cinnamon ice-cream, Arundhati Roy had received more threats for her work. Hugh Hefner echoed these sentiments in his very brief acceptance speech when he dedicated his award to Erwin Arnada, the former editor of the Indonesian version of Playboy who remains behind bars for publication of a non-nude Playboy issue.

Anyway, my friend Cecilia, an excellent writer herself, was kind enough to go, take photos, and send me an email about the glamorous event. With her permission, I’m sharing her report here.

It was a great time last night at the PEN awards. I met some nice people, didn’t get to meet Hef, but here’s a picture of him: 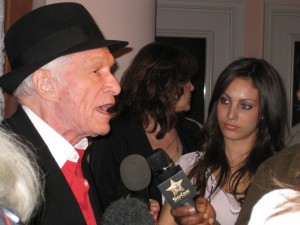 I’m very bad at taking pix unless I’m in photographer mode, so here’s one of the chandelier in the reception room: 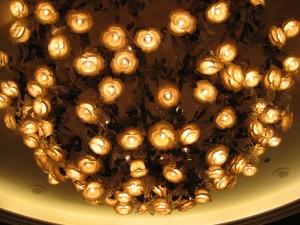 I didn’t get to see The Fonz, since he only came via video feed. But I did meet Lin Oliver and Amy Catanzano, the woman who won the Poetry award this year. I have the program and a small stack of books for you, if you want them — “This Lovely Life” by Vicki Forman, “The Pastoral Clinic” by Angela Garcia, and “The Dunderheads” by Paul Feischman.

AND of course, your award. 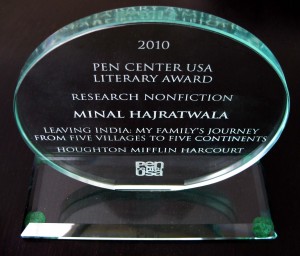 Which is beautiful and a nice, heavy glass. It’ll make a good paperweight and/or murder weapon, I’m sure.

The award presenter had a really hard time pronouncing your name. So I got up to the podium and just pronounced your name correctly and that got a good round or applause. And your speech got a good reception, too, a responsive and rapt audience — especially surprising for an awards ceremony that went past 11pm.

All in all a good evening. And now I have a copy of your book to read, which I’m excited about!

So, that’s the brief wrap-up. CONGRATS to you!! It really is great that your book and you are receiving the accolades you deserve!

Here’s the full list of award winners and the official event pictures/slideshow.

And, just to make this a *really* long blog entry, here’s the acceptance speech:

It’s a great honor to be recognized here among so many distinguished writers and thinkers. I’d like to thank my families, both given and chosen, without whom this book would not have been written.

I regret that I can’t be with you here tonight because I’m in Mumbai, India, where as it happens, the mission of PEN is incredibly relevant as right-wing politics are threatening the freedom of writers. In the past few weeks, Arundhati Roy has been subject to threats of jail time, and a mob has attacked her home. Rohinton Mistry’s novel Such a Long Journey has fallen prey to censorship and book-burning; on that matter, I hope you all will consider signing the PEN petition, which complements efforts by Indian activists to uphold freedom of speech in the world’s largest democracy.

Traveling as an American across the planet, I am deeply aware of the privileges we possess, and also how the work of authors worldwide is so very precious and so countercultural. We who write books –- these archaic objects that require hundreds of pages and hours of time to digest, let alone many years to write -– are always working against the dominant narrative. We are restoring complexity to topics which most of our culture and our media is devoted to oversimplifying.

In the United States, immigration is one such topic. We’ve just suffered through a political season in which, once again, immigration was invoked as a wedge issue.

Leaving India tells the story of my family of migrants, and the larger story of India’s diaspora, of how and why 30 million people migrated out of India all over the world over the past 100 years. Through this process, I came to find my home here in the great state of California, which has seen countless waves of migration in its young life. At each juncture, ordinary people and their representatives have had to decide what kind of California they want, and they have not always chosen well.

A hundred years ago, a Government report described people of India as “the most undesirable immigrant in the state,” absolutely “unfit for association with American people.” Barred from owning property. Turned back at the borders. Denied citizenship when the U.S. Supreme Court agreed that “the common man” would “instinctively… reject the thought of assimilation” with “the Hindoo.” And for nearly fifty years, America’s borders were closed to Indians.

But history is cyclical, and everything changes. Just over a week ago, President Obama was in Mumbai forging new partnerships, promising to work hand in hand with the people of India, guided largely by some of the 1.7 million people of Indian descent who now live in the United States.

I’d like to thank Pen USA and the judges for recognizing the importance of these stories, the stories of migrants, and each of our personal and historical memories. Because, despite the rhetoric, it is our own intimate histories which add up to the real story, the complex story, the one we know in our bones to be true, which is that this land has been and will continue to be shaped by immigrants and the children of immigrants — with or without books to their names; with or without the right papers.

Thank you very much.