If you belong to a group that cares about books or rights, encourage your organization to make a public statement.

Or, How Amazon Disappeared Me (Us)

As a new author, I try to keep tabs on how my book is doing. I’m not obsessive about it (really! I swear!), but I did notice the other day that my Amazon sales ranking — that little number that says my book is the 15,000th bestselling book of the moment, or whatever — had disappeared. I thought maybe I hadn’t logged in properly, or it was a temporary glitch, and figured I’d try again later.

Now, thanks to blogger and publisher Mark Probst, I know why:

Amazon had stripped all books labeled “Gay & Lesbian” of their rankings, categories, and searchability. That meant the main entry for my book — which was listed under “Gay & Lesbian” as well as “Nonfiction,” “Biographies & Memoirs,” “History,” etc. — no longer showed up under an Amazon search for either “Leaving India” or my name.

Probst broke the story early Sunday morning in his livejournal blog after receiving a response from customer service saying that Amazon was instituting a policy to prevent “adult” content from showing up in searches. He figured out that Amazon was excluding all titles labeled “Gay & Lesbian” from searches, when one of his young adult titles was de-ranked.

Suddenly, anything gay was rated X.

As a means of protecting customers who might not want to see explicit material, the policy was wildly inconsistent:

And my book, which has zero explicit sexual content and approximately one kiss (no tongue), wasn’t showing up on a search, while a similar (straight) book that’s packaged with mine was.  Gayness trumped all other categories.  A little bit of gay was enough to disappear a book.

It’s unclear what criteria Amazon was using besides the “Gay & Lesbian” label, but an awful lot of titles were suddenly rendered invisible.

I called customer service and politely asked the nice representative to please register that I object to the new policy that makes it impossible to find gay, lesbian, and adult titles through a search. (Phone: 1-866-216-1072. Email form: http://bit.ly/amazoncomplain)

Then I started digging.

Until now, “Gay & Lesbian” on Amazon.com was a content label similar to “Home & Garden,” “Mysteries & Thrillers,” etc. It was a marketing label designed to make it easier for customers to find books that were of interest to them. Amazon was now using the label as a way to exclude rather than include books. But its menu still listed “Gay & Lesbian” books — 22,381 of them — so I clicked on a random selection.

I found that, without exception, all of the titles were de-ranked — meaning that the main entries for these books would not show up in searches.

This included titles that have a long and valiant history of being censored, as well as others that make you go “hmmm”: 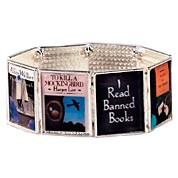 • Orlando by Virginia Woolf
• Feminism without Borders: Decolonizing Theory, Practicing Solidarity by Chandra Mohanty
• A Picture of Dorian Gray by Oscar Wilde
• Fun Home by Alison Bechdel
• A History of Sexuality by Michel Foucault
• The Mayor of Castro Street: The Life and Times of Harvey Milk by Randy Shilts
• Founding Mothers: The Women Who Raised Our Nation by Cokie Roberts (note to self: gotta check that one out for racy content!)
• Fried Green Tomatoes at the Whistle Stop Cafe by Fannie Flagg
• Bastard Out of Carolina by Dorothy Allison
• Prayers for Bobby: A Mother’s Coming to Terms with the Suicide of Her Gay Son by Leroy Aarons (a late friend, founder of the National Lesbian & Gay Journalists Association)
• Oranges Are Not the Only Fruit by Jeanette Winterson
• Rubyfruit Jungle by Rita Mae Brown
• Stone Butch Blues by Leslie Feinberg
• Zami: A New Spelling of My Name by Audre Lorde
• Reconstructing Gender: A Multicultural Anthology by Estelle Disch
• The Transgender Child: A Handbook for Families and Professionals by Stephanie A. Brill and Rachel Pepper
• The Laramie Project by Moises Kaufman
• The Other Side of Paradise: A Memoir by Staceyann Chin
• Michael Tolliver Lives by Armistead Maupin

As I pulled out titles I recognized from the thousands on the Amazon gay=bad list, I first felt proud to be in such good company.

But scrolling through page after page of de-ranked titles, I felt profoundly sad that all of this amazing work — the genius of our community, heartfelt stories of true experience, our deepest intellectual and emotional grapplings — had been deemed, not to mince words, obscene.  Inappropriate. Wrong. Bad. Needing to be zapped out of existence.

And then, as I kept going, I noticed that the policy had… changed!

Suddenly, the books started showing up in searches again.  Including mine.

But as of right now, the sales rankings are still missing.  This means that titles tarred with the “Gay & Lesbian” brush can never show up in, for example, bestseller lists on Amazon — since bestsellers are defined by rankings. On a personal level it also means that a week ago, for example, I could see that my book was #22 of Biographies & Memoirs –> Ethnic, and #18 of Gay & Lesbian –> Biographies & Memoirs, and so on. Now, that information is simply gone.  To me this was a narcissistic exercise; to a prospective book-buyer, the sales rankings might range from totally uninteresting to mildly influential.

In addition, the loss of categories means that you can’t get to my book from another book. If you’re looking at Suketu Mehta’s Maximum City: Bombay Lost and Found, and you click on > History > Asia > India to find similar books, you won’t find mine.  Gayness, it seems, trumps all other categories; if you do manage to get to the page for my book, you won’t see any categories describing its content.

I’m grateful for the grassroots power of the Internet that caused Amazon to rescind the most punitive aspect of its new policy, less than twelve hours after Probst posted his blog entry.

I’m shocked by the fact that, in 2009, the mere presence of “Gay & Lesbian” content can deem a book inappropriate — not by some hick rightwing school board in Texas, but by the largest bookseller in the United States.

I’m saddened and angered by the continuing differential treatment.

And I’m firmer than ever in my support of independent bookstores, where books aren’t sold by algorithm but out of love and an unwavering commitment to authors, stories, and freedom of speech.

14 thoughts on “Amazon and Invisibility”