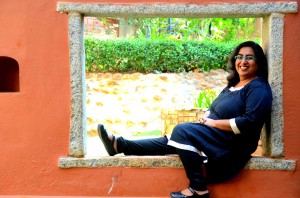 A few notes on how my community helped create this book

So this is the closest I’m likely to get to a fashionista award. 🙂

“The Wardrobe,” a very fine literary journal, chose me as their featured poet last week — which they call the “best dressed.” Get it? Wardrobe? Best Dressed? OK!

Every day for a week, they chose a poem from my book Bountiful Instructions for Enlightenment.

It was fun and surprising to see their choices, and made me reflect on how each poem developed. I realized how community has played a HUGE role in the development of my work. I’m an auto-didact as a poet — no M.F.A., no formal course of study.  I never even took a creative writing class in college.

So everything I’ve learned has been from knowing and reading other poets, and in short-term community workshops. I’m so grateful for those spaces.

Here are the behind-the-scenes stories of the five poems:

Her Discourse on the Leaf

Back in the 1990s I was a copy editor at a newspaper. One weekend I took a furlough to feed my creative side through a UC-Santa Cruz extension course with the still-underrated Kate Braverman. Kate was a brilliant and original fiction writer who never received the acclaim she deserved, and was endlessly bitter because she knew it. All Saturday she held forth on various techniques and strategies and passionately stated ideas about writing. During a break, she collected the giant maple leaves that had fallen all over campus and gave us each one leaf, with instructions to come back on Sunday with a piece.

In a cheap motel room I poured my fury, shame, and bucketloads of tears—for her? for myself? for our country at that moment?—into that leaf.

I also met Gerald Fleming in that workshop, and he published an early version of this piece in his literary journal Barnabe Mountain Review, helping me to edit and clarify the language.

This poem is about how it sometimes feels to be an Asian American woman writer, expected to write to stereotypes.

I was lucky enough to be part of a queer Asian American women’s writing group in San Francisco, which lasted long enough for us to meet several times before the co-organizers broke up. I also remember being particularly moved by my friend Indigo Som’s art installation, in which she stitched words onto various lake-colored silk squares.

I can’t remember exactly, but I suspect this poem emerged from my time in that lovely little community.

The Goddess of Lemons

This poem started out as a fake translation. I wrote it in a tiny four-person workshop a million years ago in New York City, taught by Jeet Thayil at the Asian American Writers’ Workshop. We read the poem in Italian, then wrote our own “translation.”

I was in my 20s and learning like a sponge, and I distinctly remember Jeet’s kind words about it at the time; he told me it was not far from the spirit of the original. (Teachers: A little kindness can have such a big footprint!)

I kept working on the poem over the years, and when I was putting together Bountiful Instructions for Enlightenment, I found that it fit in perfectly with other the goddess and mythology poems in the book.

Archaeologies of the Present: The Professionals

I’m always totally surprised when people are interested in these poems, which are long and experimental and, to me, totally weird.  I wrote the “Archaeologies of the Present” sequence at the turn of the millennium, 1999-2000.

At the time, the writer Lisa Margonelli were in a fellowship program together at the Sundance Institute. It was Lisa who gave me the spark about the pastry chefs using blowtorches, which appears in this poem — a new development in the San Francisco gourmand scene in 1999.

Archaeologies of the Present: The Hungry

And finally, another flashback to 2000. This piece refers most obviously to the weirdness that is/was the 4th of July, and also to a surreal cartoon movie “Chicken Run” (2000) which I for some reason saw, starring Mel Gibson’s voice.

What can I say, millennials? You really were born at a strange time in America.

Get the book now!

Bountiful Instructions for Enlightenment has been called “electric,” “stunning,” and “fresh” by much finer writers than I. Here’s how you can grab your copy:

Or buy on Amazon:

Email indianpoetrycollective@gmail.com for bank transfer details. The local price is only 350 rupees, and funds go to directly to The (Great) Indian Poetry Collective to publish new poetic voices from India.