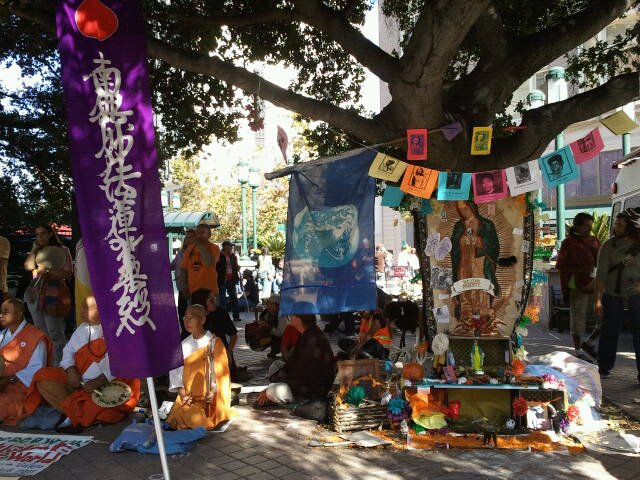 photo from my friend Prajna Paramita Choudhury’s Facebook page. she captioned it:
“the fifth sacred thing” at decolonize oakland – spirit, love for all beings past, present, future. may all beings be safe, happy, healthy, and free.
*
live news feed on Decolonize Oakland general strike today:
http://twitter.com/eastbayexpress
*
I decided not to go to the protests today. I had wanted to go and meditate in the interfaith tent with the teachers from East Bay Meditation Center who are leading sits at 11am and 4pm today. I would have liked to wear my unicorn hat and sit peacefully amid the energies of the crowd.

But I am having menstrual cramps and didn’t sleep enough and have a lot of work these days, with not a lot of time. I can’t believe it’s only 24 days till I go back to India.

All day I was debating. I sent out my last Writing from the Chakras lesson to my students which was due at noon, and then I finished my client’s coaching call at 2pm. Then I sat for a minute to decide whether to go or not, and I realized I hadn’t eaten lunch and I was feeling I *should* go, not that I wanted to go.

My bodyworker told me last week, “Anytime we are saying ‘should,’ it’s an unrealistic expectation.”

My body is telling me to be still and take care of it today. OK. I’m going to go have lunch, get my flu shot, rest.

I wonder if my so-called radical days are over. I feel a little sad about that, too.

I am happy the protesters are safe so far, the police seem to be restrained so far today, and the banks closed down one by one. The longshore workers’ union shut down the Port of Oakland first thing in the morning. These are symbols but as a writer I know symbols are powerful.

Oakland is beautiful and sunny and proud today. My heart is there, as well as with everyone I know who is out of work or without enough work, submerged under student debt, struggling for an education or for an honest living, coping without health care or inadequate care, and all the other problems that our late-stage capitalism has saddled us with.

There is a myth that corporations are the only source of wealth. It isn’t so. Communities thrived long before the advent of massive multinational corporations that go where the cheapest labor is, create artificial needs through advertising and desperation, drive small businesses into the ground, and then milk the most they can out of the consumer once they have a monopoly. There are ethical businesses, sustainable collective enterprises, ways to make a living that are good for everyone and that do not require exploitation or the creation/maintenance of a massive underclass of cheap, uneducated, desperate workers.

Capitalism is the dominant narrative, the air we breathe, so it’s difficult for us to even see another way. But I think as writers and artists it is our responsibility to see, to be part of creating that alternate vision and telling the stories of people and cultures who know a way out of the mess we’re in.

Capitalism with the proper checks and balances might — might — be ok. Capitalism the way we have it now is clearly wrong, not only for the United States but, as we export it, for the rest of the world too. I think of the Chinese sweatshop workers who made the Macbook on which I type this, and I know it is my responsibility to, somehow, symbolically or not, in some small way as much as possible, speak up for or be part of undoing that harm. It is my job, as a writer, as a conscious American now.

I am proud that the movement in Oakland is, from everything that I can see, diverse and representative of the America in which I live. It’s a testament to the antiracist work that has been done by and with white folks in the Bay Area, that when the language issue was raised by Native folks about the “Occupy” terminology, Oakland revised its movement to “Decolonize Oakland.”

That’s a narrative I can get behind.

So much of the work I do as a writer and writing coach is about decolonizing. Allowing ourselves to tell the stories that go against the dominant narrative, what has been handed down. Pushing upstream to tell the truth as we see it, despite what we have been told we are / are not allowed to say. Undoing the internalized oppression that keeps us silent. Letting go of those ‘shoulds.’

A book of poems I’m loving: “Inside the Money Machine” by Minnie Bruce Pratt

One thought on “Some Thoughts on Decolonizing”