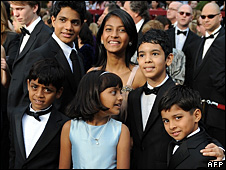 Tonight I get to do two things I’ve never done before: be part of a webcast, and act like an official Oscar critic!  If you feel like chatting about “Slumdog Millionaire,” please tune in tonight right after the Best Picture Award is announced.  Here are the details for how you can join the conversation in a few different ways — by phoning in like a conference call, listening on the web, or following it on Twitter:

I usually consider this Oscar better company than this one, so it’ll be a fun night for me to blend the two.  Most of the other official commentators on the webcast, including the journalists, are quite gung-ho on the movie.  I didn’t hate it, but I definitely had issues which I wrote about here and here, so I get to be the critical voice on the panel.

But opinions are like, um, bellybuttons (to put it politely); everybody has one. I’m less interested in my own opinion than in how the film made me think about art-making and the ethics of telling someone else’s story, something I struggled with as I wrote Leaving India.  Anyway, it will be interesting to see what everyone has to say.

Have fun tonight, whether or not you’re spending it with Oscar!