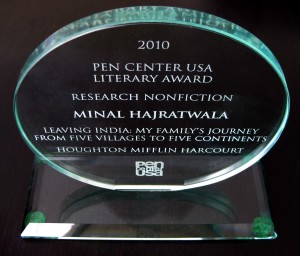 I love Minal Hajratwala’s book Leaving India. It is what I imagine India itself to be like: incomparable, sprawling, rich, surprising, very old and wise and forever capable of re-creating itself, no matter where pieces of it land. Minal Hajratwala is a fine daughter of the continent, bringing insight, intelligence and compassion to the lives and sojourns of her far-flung kin. For those of us who have needed to understand the presence of so many Indians in our various lands, this book is a wonderful primer.

Leaving India gives us a means to understand the forces that took so many Indians (my parents included) away from their birth land … Echoes of V.S. Naipaul … Rich, entertaining and illuminating.

Meticulously researched and evocatively written … searingly honest … Leaving India is a story of migration, but it is also, as Hajratwala reminds us, about “the ones we leave behind.”

Leaving India is a fascinating history that kept me up late into the night—and I suspect it will do the same for most readers. Filled with amazing and compelling family stories, it will strike a chord in anyone whose people have come from elsewhere—and today, in America, that’s most of us! I am filled with admiration at Minal’s honesty and the careful beauty of her language. I learned so much, through the story of this one family, about the tragedies and triumphs of the Indian diaspora.

A powerful, eloquent reminder that, while forces of history and politics do shape the story of each and every one of us, they do not define us.

Told with the probing detail of a reporter, the fluid voice of a poet and the inspired vision of a young woman who walks in many worlds, Hajratwala’s story offers an engaging account of what may be one of the fastest-growing diasporas in the world.

A spirited journey through the extended Indian diaspora over the last century … Intricately layered … Immense fortitude and bravery.

Leaving India stood out in a category crowded with memoir, personal journeys, migrations and coming-of-age stories because it was all of that—yet so much more. Minal Hajratwala’s book captures the story of a vast diaspora through her scattered family, chronicling successes and failures with honesty, empathy, explanation and context. She expertly weaves history into her rendering, and so her book is more than one family’s tale but the broader story of the nations, professions, and identities they embrace.

Powerfully candid… While presenting a groundbreaking history of one of the world’s fastest growing diasporas, the book is also deeply moving—with stories of finely drawn characters we care about. Leaving India raises profound questions relevant to all of us who have been shaped by a history of immigration.

PopMatters, a journal of cultural criticism:

Leaving India is a profoundly important book in the canon of South Asian American Studies. I would go so far as to place it at the very top in the company of essential accounts of the Diaspora …

[A] significant intervention into diaspora studies. … Leaving India is a compelling narrative and one that should be in all of our reading lists.

Read or write customer reviews at Amazon and GoodReads. 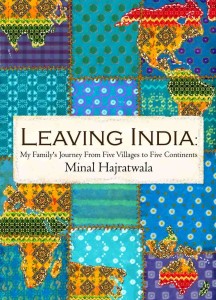