Had a really lovely event at the Commonwealth Club in San Francisco last night. They’re doing a whole month on India so I’m hoping to go see my friend Vini speak on August 23 (she’s awesome, who wants to go with me?). And then I have my own talk on Thursday, August 25 (I’m awesome, click here to buy your tickets now! heh!). Here’s the description of my talk:

India and Her Fragments:
Migrations from Old to New Worlds

The story of India’s 30-million-and-growing worldwide diaspora is reshaping trade, identity and culture all around the globe. Fresh from a Fulbright Senior Research Fellowship in India, Hajratwala will speak on what Americans need to know today about the rapidly changing country to which nearly 2 million Americans trace their roots. Hajratwala will draw from the seven years of research that led to her nonfiction book, Leaving India, winner of a California Book Award (Silver) and three other literary awards.

I always love speaking at the Commonwealth Club because, having listened to their public radio broadcasts for years, I love watching someone (in this case the charming Julian Chang) pound the gavel that begins and ends each session. Yes, my name is Minal and I am a public radio geek.

Last night’s event was cool. I’d just flown into SFO the day before so it was great to jump right in — a panel discussion on being gay & Indian. The Sexy Grammarian showed up with her sexy wife, the panel was packed with longtime friends from my old Trikone organizing days, and the audience of about 50 was enthusiastic and articulate.

I got a chance to talk about some trends in the LGBT movement as I’ve observed it in India and to plug the upcoming anthology I’m editing for Queer Ink. Apparently the discussion will be broadcast on Diya TV and KQED radio sometime soon, so I’ll post the links when they go up.

There were some really nice, enthusiastic folks in the audience who were totally sweet to me. I sold a couple of books. One young man had driven up all the way from LA to see me speak and get a signed book! Totally made my night.

All in all, a lovely re-entry to my favorite city in the world. 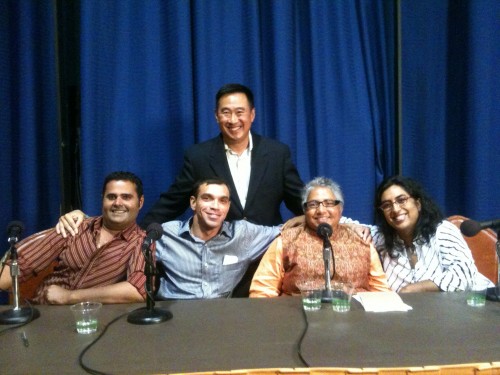